Anticipating the Appraisal…and Acting On It

When markets are moving faster than normal, as they are in the neighborhood illustrated in the chart below, not everyone can keep up with the changes.  Real estate agents are better positioned than most to recognize the situation and to do something about it. 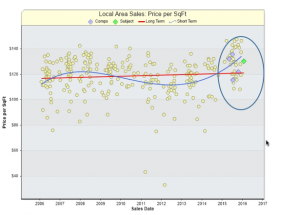 The market trend for price per square foot in this particular area (which is a neighborhood in South Durham, NC) is increasing rapidly.  This is a very common situation in many areas right now.

If we measure the trend average price line on the chart, we’ll find that it is increasing by about 12% from early 2015 to early 2016.

Agents know intuitively that the market is rising (or falling), but it is often hard for them to determine the magnitude of the change, especially in the clients’ own neighborhood.  The market trend chart solves that problem because it uses localized data chosen by the agent.

Life gets a little more difficult with the appraisal though, because the appraiser has a very heavy reliance on comparables.  Some of the comparables used in the appraisal may have been sold 4 to 6 months ago, at prices that, if adjusted for the market trend, would be 4% or 6% higher had they been sold at the time of the appraisal. On a $200,000 house, that is an $8,000 to $12,000 difference in value.  Pretty significant.

Knowing that this is happening, agents are rightly concerned that if they account for the trend and price the home properly, it may not appraise.

Rather than try to react to this situation by hoping for the best, or even worse, by recommending a lower price, it might be a good idea for the listing agent to meet it head on and consult with the seller about including an appraisal contingency in the contract as an additional condition.

For example, the contingency clause, drawn up by an attorney, would state that if the appraised value is less than the contract price, the buyer will make up the difference in cash at closing. The agent might even want to include the trend chart in some of the selling information.

This clause can be varied any number of ways to include caps on the buyers’ exposure and options for the seller, but whatever the form, it is a big step toward heading off a failure to close for a problem that is all too common in rising markets…and it will likely save everyone a lot of wasted time if the buyer is pushing his budget limit, as is often the case.